Kate del Castillo to play PRESIDENT VALERIO in OVER the BORDER 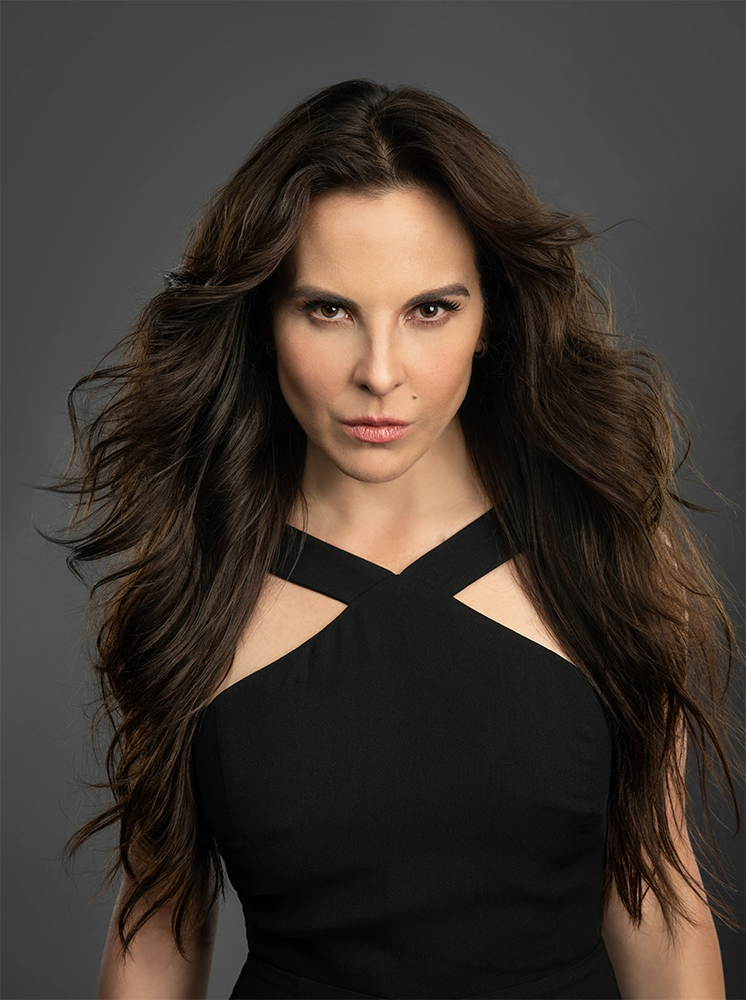 Mexican actress Kate del Castillo broke through in America as a result of her award-winning performance in the hit Fox Searchlight/Weinstein movie Under the Same Moon (2007), which is to date the highest-grossing Spanish-language theatrical release in U.S. history.

Kate starred as “Queen of the South” in La Reina del Sur (2011) a short form prime-time telenovela for Telemundo (NBC/Universal) and Antena 3 (Spain.) This adaptation of the bestseller by Spanish novelist Arturo Perez-Reverte drew more than 8.1 million viewers in its debut week, making it the most successful telenovela premiere week in the web’s history. It continues to break records attracting male viewers and non-Spanish speaking viewers.

Del Castillo appeared as a guest star in six episodes of the fifth season of the Showtime hit comedy series _Weeds_. She starred as ‘Pilar Zuazo,’ a powerful Mexican crime boss who threatened Nancy (Mary-Louise Parker) and Esteban’s romance and was then hit with a mallet by Nancy’s son.

Del Castillo recently starred in Univision.com’s first-ever webnovela (which she co-produced), “Vidas Cruzadas” (Crossed Lives). The series was a huge success and generated more than two million video streams through September 15, 2009 making it one of the three most-watched online properties ever according to the network.

L’Oréal Paris signed del Castillo to an exclusive U.S. contract as a spokesperson for the company and its beauty brands. The advertising was shot in Los Angeles and Paris and appeared in the U.S. and Mexico. The California Ford dealers tapped her as its spokesperson to star in their television and radio ads. The History Channel named her Network Spokesperson for Hispanic Heritage Month in 2007.

Kate del Castillo, was appointed Ambassador for the Mexican Commission on Human Rights to combat human trafficking in 2009, and launched the Blue Heart campaign in Mexico City with U.N. Goodwill Ambassador Mira Sorvino in 2010..

She began her acting career as a child, but it wasn’t until the enormously successful telenovela “Muchachitas” that she became a full-fledged star in Mexico. She went on to become the leading ingénue of nine telenovelas, including “Ramona” and “La Mentira” taking them to the top of the Nielsen charts every time. Her telenovelas have aired multiple times in more than 100 countries worldwide. Kate received various accolades for her critically acclaimed performance as a Bolivian dancer in American Visa (2005) including “Best Actress” awards in film festivals in Spain and Brazil, and a “Best Actress” nomination at the Ariel Awards, Mexico’s equivalent to the Oscars. In the United States, the movie premiered at the AFI Film Festival in Los Angeles, to a sold-out crowd. She also did a cameo in Bordertown (2007) as Antonio Banderas‘s long-suffering wife.

Kate returned to her theater roots in Mexico for a sold-out eight week theatre run in the two character David Harrower play “Blackbird” (“Pájaro Negro.) She won the “Best Actress” award from the Theatre Critics Association in Mexico.

Kate has graced the covers of the top Spanish-language magazines, and was People en Español’s 2007 cover Actress of the Year, as well as one of their “Most Beautiful People.” On September 13, 2009, Kate served as Grand Marshall in Los Angeles’ Mexican Independence Day Parade.

Kate was the voice of Sally Carrera in the Spanish version of Pixar/Disney’s Cars (2006) and will soon appear in the animated Rio (2011)_ as a bird/wife to George Lopez. She made her crossover debut on television in the U.S. in the Golden Globe-nominated PBS series American Family (2002) alongside Edward James Olmos.

She is developing a project for television, which she hopes will showcase her love of extreme sports. She published her first novel “Tuya,” which is based on her screenplay, and it is now in its third printing.