Maite Perroni to play EVA RUIZ in OVER the BORDER 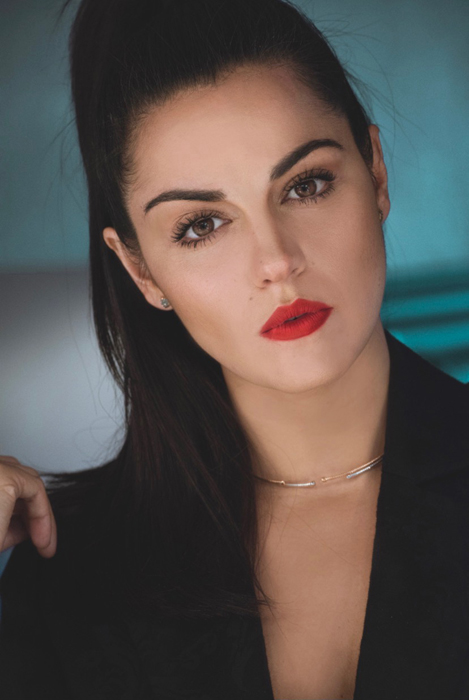 Maite Perroni is one of the most prominent and successful artists in the Latin World. The latest project – Maite is the lead actress in the new Netflix thriller series “Oscuro Deseo” (Dark Desire) released this 2020 in over 180 countries worldwide ranked in the Top 10 most-watched series in Mexico, United States, Brazil, Venezuela, Spain, Dominican Republic, Peru, Costa Rica, Argentina, Paraguay, Honduras, El Salvador, Ecuador, Israel, Nicaragua, Chile, Bolivia and Colombia, among others.

She is also the lead actress of “Herederos por Accidente” (Accidently Heirs) distributed by “Claro Video” released this year. And soon it will be released by MGM International to the rest of the world. Since its premiere on Claro Video, the series has broken rating records, reaching the highest audience figures ever achieved on that platform.

In the Mexican comedy film “Doblemente Embarazada” (Doubly Pregnant), Maite is the lead actress and associate producer. The film was released in December 2019, with more than 500,000 viewers in theaters. It is now available on Amazon, Prime Video, and Pantaya. The film was ranked in the Top 5 most-watched films in its release month on such platforms.

“El Juego de las Llaves” (Key’s Game), produced by “Lionsgate,” “Corazón Films,” and “Hemisphere Media Group,” along with “Amazon Prime Video,” is the first series in the Spanish language distributed worldwide. In this project, called “The Best Series of the Year” by the GQ Magazine in Mexico, Maite is the lead actress. For her outstanding performance in this series, Maite was awarded the Crystal Screen Award for Best Actress in a Leading Role.

Renowned for her beauty, Maite was selected to be among the top ten of the “100 Most Beautiful Faces 2016” by TC Candler – the only Mexican on the list for five years in a row. She has also made the “The 50 Most Beautiful People in the World” by People En Español for 12 years running. Maite was the ambassador for the brand Proactiv for the U.S. Hispanic Market for six years.

She has starred in the hottest, most popular “Telenovelas” (Soap Operas) for over a decade. Rebelde (Rebel), Cuidado con el Angel (Don’t Mess with an Angel), Mi Pecado (My sin), Triunfo del Amor (Triumph of Love), La Gata (The cat), Antes Muerta que Lichita (Anything but Plain), among others. Maite is also an award-winning recording artist, performing sold-out concerts throughout Brazil, Mexico, Spain, and Ecuador. Her latest CD, on the Warner Brothers label, released in September 2013, was an instant success and quickly reached #2 on the Billboard 100 charts. She has hosted prestigious awards shows such as the 2019 “Lo Nuestro Awards” and “The 25th Annual Hispanic Heritage Awards Ceremony.” Through it all, Maite still finds the time to keep in close touch with her fans – which include more than 7.9 million followers on Facebook, more than 4.7 million on Twitter, more than 8 million on Instagram, and over 1,900,000 YouTube subscribers.

Maite’s TV career began when she starred in the telenovela “Rebelde.” From the show came the musical group RBD, which featured Maite as a lead singer. She helped carry the group to worldwide recognition and acclaim; they won several awards, including “Best Group of the Year,” “Best Album of the Year,” “Best Concert,” and “Best Song of the Year.” RBD has sold over 50 million records and sold out venues such as “Estadio Maracaná” in Brazil, Madison Square Garden in New York, L.A. Coliseum, American Airlines Arena in Miami, Estadio Vicente Calderón in Spain, Auditorio Nacional and Palacio de los Deportes in Mexico City, among others.

Her popularity was cemented in 2008; she was selected by Mexico’s youth to become one of the first Latin women to have an iconic Barbie doll fashioned after her. The Maite Perroni Barbie was a success in Mexico, the USA, Latin America, and Spain.

She released her first solo album in 2013, entitled “Eclipse de Luna” (Moon Eclipse). The music video for the album’s first single “Tu y Yo” was released during the “Premios Juventud 2013” (2013 Youth Awards), which was broadcasted on Univision and was watched by over 13 million viewers. The CD reached #2 in the USA Latin Pop Charts.